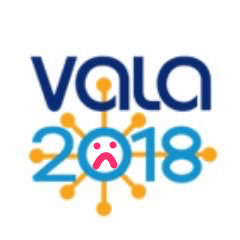 This is my actual face.

I was sad to miss VALA this year. I had long dreamt of attending this huge library technology conference, seeing my favourite people, learning about what others are achieving in this space. The lineup looked amazing, and I’m sure I would have had a whale of a time. But I didn’t have a spare thousand bucks (!) to drop on a ticket. My workplace, where I am on a temporary contract in a non-library-technology role, would not have financed it either. So I didn’t go.

Instead, I attended vicariously through Twitter, where the @VALAlib account (ably run by @mpfl) live-tweeted throughout the conference. The organising committee also posted all the conference papers online before the conference, which turned out to be a boon for cross-pollination!

The idea of putting @VALAlib papers out there pre-conference has already proved an ace move – @kylie_poulton’s paper on text-mining got referenced in @1n9r1d’s talk at #RSCDay2018, and #VALA2018 hasn’t even started! pic.twitter.com/wEwOXzcoFK

Somehow, between eyeballing the #VALA2018 hashtag and sitting at work trying to get work done, I managed to learn a few things… or not:

The idea of “everybody should code” is deprofessionalising people with those skills and then we’re not obliged to pay them as much. #vala2018 #rt1

I agree that not all librarians would find coding skills useful or necessary in their work. But with library services becoming increasingly top-heavy, with less skilled staff continuing to lose their jobs, with the industry contracting, with the job outlook for librarians looking rather bleak, with our future becoming increasingly reliant on technology whether we like it or not, wouldn’t you want to make yourself as employable as possible, and learn some code basics?

On one level, conferences aren’t meant to be realistic. Presenters will usually highlight the good things they do and gloss over the bad things it took to get there. (Andrew Kelly’s talk was a notable exception, and I’m sure there were others.) We’re meant to leave conferences hyped up and enthused and ready to make change happen in our workplaces and communities. But I brought a much higher dose of cynicism and realism to my remote conference experience. I can’t implement any of these radical and awesome ideas, or in fact any ideas at all, without additional funding, staffing, support and time. Or a permanent job.

It was immensely gratifying to hear Angela speak of tech services as ‘public’ work. Our direct patron interactions may be limited, but the interfaces and discovery systems we create, maintain and troubleshoot are the centre of most patrons’ experiences of a library. They may never visit us in person. They may never speak to a staff member. But they’re using our catalogue, our databases, our libguides, our websites. Those things don’t build themselves. They exist because a lot of people worked very hard (and a small number of people paid a lot of money).

The characterisation of tech services workers as the ‘backend’ of libraries is increasingly inaccurate. The metadata I work with is viewed by thousands of people. If they can’t access an online resource, it’s my job to rectify it. I may not get to decide what the library purchases and how much they’re willing to pay, but I can decide how that resource is presented to patrons. I game the search results all the time. I edit metadata every day to make it better and clearer for patrons to use. I may not be public-facing, but my work certainly is, and it’s about time library administrators really acknowledged this. A little self-esteem is a wonderful thing.

Things I’m taking away from that amazing plenary: 1) be self-critical of our own invisible assumptions about neutrality, algorithms & technology, 2) interrogate our problematic relationships with publishers, 3) be actively compassionate to our communities & users. #VALA2018 #P4

(Not gonna lie, I was also extremely here for the LexisNexis joke. Next week, part of my ref desk work will likely involve advising first-year law students how LexisNexis works. I hope they don’t ask me. I have no idea.)

But next time, I think I’d rather just go.