It’s the Wednesday after the weekend before, and I’m exhausted just thinking about NLS8 (the ALIA New Librarians’ Symposium in Canberra, which I attended last weekend). To be honest, I’m exhausted just thinking about a lot of things. I wasn’t clever enough to get the following Monday off work, so I’ve been showing up all week with a head full of ideas and a to-do list as long as your arm. I usually drink tea at our weekly morning meeting, but this week I drank Berocca instead.

I’m overjoyed to report that I had an absolute ball at NLS8. It was a great use of a weekend that I would otherwise have spent doing very little. I also definitely got out of the conference what I had hoped to: I networked with like-minded and similarly-aged people, I attended all bar one of the events I wanted (and that one was due to a clash), and I had an unseemly amount of fun. I also learnt a lot, too. Here is a selection of those things:

My reputation precedes me! Despite having a kaleidoscopic swirlygig for a face and not specifying my surname, my hometown or my place of employment anywhere on the internet, I was astonished by how many people recognised who I was, and who seemed pleased to meet me. My prodigious use of Twitter accounted for most of this. In fact, I had at least three conversations broadly modelled on the following:

I also had several people tell me how much they enjoyed my blog, which was just such a huge thrill. I heard that people like that I generally say what I think, which is not usually what the library industry wants to hear. In all honesty, though, I don’t have the good sense to know when to shut up. I have always been quite a blunt person, though I’m trying to learn how to be more polite while still being direct and to the point. Let me know if I’m failing miserably!

NLS8 really focussed on teaching useful skills. I had chosen talks and workshops with a practical bent, as I was very keen to come out of NLS8 with an expanded toolbox of concrete, applicable skills that I could use at work. Accordingly, the Library Carpentry workshop by Carmi Cronje and Fiona Jones, which taught the basics of OpenRefine, fit this bill perfectly. By the end of the session I felt like I could not only use OpenRefine confidently and to great effect, but that I knew exactly how I would do so at work the following Monday! (My notes for this session included ‘Dead useful!’, ‘The data cleaning tool I knew existed but didn’t know how to use!’ and ‘Such great teaching too!’) I also enjoyed Jade Koekoe‘s session on DIY Marketing for Libraries, a topic I know absolutely nothing about. Despite not having a creative bone in my body I managed to make a infographic in Canva, a tool I shall certainly use again. 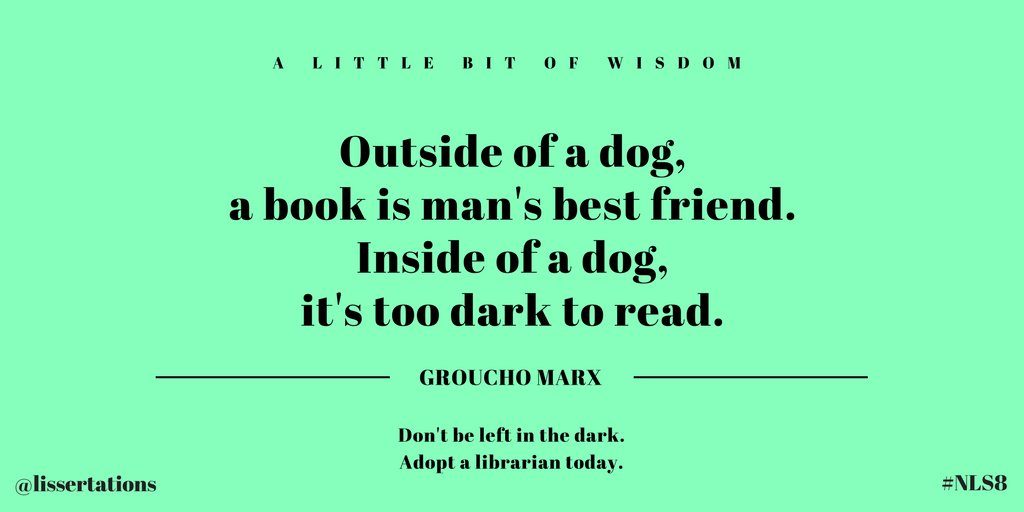 I met some wonderful people whom I really admire. I had the pleasure of meeting ILN co-founder, keynote speaker and all-around gem Clare McKenzie (who was inexplicably keen to meet me too!). We had a great chat about the awesomeness that is New Zealand’s National Digital Forum and the GLAM Digitisation Google+ group that we co-moderate. I also followed Clare’s keynote advice and told a few people that I love their work, including Matthew, who does some great digitisation and digipres stuff; Nathan, who runs an absolutely fantastic blog on archival decolonialism (seriously, read it); and Katie, who is one of the nicest and coolest people I’ve ever met, and who also creates some bangin’ #critlib zines.

It’s okay to say no. Several speakers, most notably keynote Mylee Joseph, followed a running theme of exhorting delegates to get out there and say ‘yes!’ to things. Go for that job for which you satisfy almost all the criteria, put your hand up for a volunteer role, collaborate with people across teams, workplaces and professions, that kind of thing. Yet we were also encouraged to recognise our limits and say ‘no’ to things that weren’t right for us or that we didn’t have time for. I wound up saying no on two occasions to things I might otherwise, in a different time and a different place, have said yes to. The first was an invitation to be more involved in an ALIA Students and New Graduates group, whose events I attend semi-regularly. I was in fact asked several times but said no to each, reasoning that I have more than enough on my plate right now, and social organising has never been my forte anyway. The second was an invite from aforementioned idol Clare McKenzie for a selfie for our Google+ group. Despite admiring Clare a great deal and not wanting to disappoint, the group is public-facing and our (meaning my) photo would have been visible to the entire internet. I have very strict rules for myself (and have done for several years) about not putting my face online, which meant I had to say no to her offer. I felt really bad afterwards, but I know I would have felt worse had I done something that was so contrary to my values, and which I couldn’t undo.

NLS8 helped affirm a lot of my values, about librarianship and also about other things. For many attendees, the keynote speech from library evangelist R. David Lankes was undoubtedly a revelatory experience in their library careers. Lankes says a lot of things that chafe a little against the library establishment, including (paraphrasing) ‘Information literacy makes people feel better about their lousy skills’ and ‘Data often says far more about who it’s collected by than who it’s about’. His talk was all the confirmation I needed of the virtue of maintaining personal privacy online and limiting my exposure on social media. It was gratifying and reassuring that very little of the content of his keynote was news to me. I’m very aware of the risks posed by the internet: to librarianship, to information literacy and to us as human beings, and I’ve spent years ranting about them to anyone who will listen. (One of the umpteen books on my to-read list, incidentally, is called The Internet Is Not The Answer.) I’m so glad my fellow delegates had the opportunity to hear Lankes’ speech.

For my part, I spent the following session in the breakout room, trying to reconcile these progressive values of new librarianship with the unbridled capitalism that underlies so much of our profession, particularly in areas such as vendor negotiation. I had attended a workshop the previous day on the work of special libraries, hosted by GRAIL, who are part of the State Library of Queensland. The workshop was well run and I found it very informative and highly illuminating. I left the workshop with a far greater appreciation of the realities of special libraries—but I also thought that some of those realities kinda suck, especially the bits about paying extravagant amounts of money for resources the library doesn’t even own. I was saddened, but not surprised, to hear of the necessity of justifying the library’s services in purely dollar terms. These are our realities right now, but it doesn’t always have to be this way.

NLS8 really was all about the future, which I’m excited to be a part of. I left the NLA feeling re-invigorated and re-energised about my chosen career. I hope we can all take the positive energy from NLS8 and sustain it in our regular LIS practice. The future of our profession depends on it.