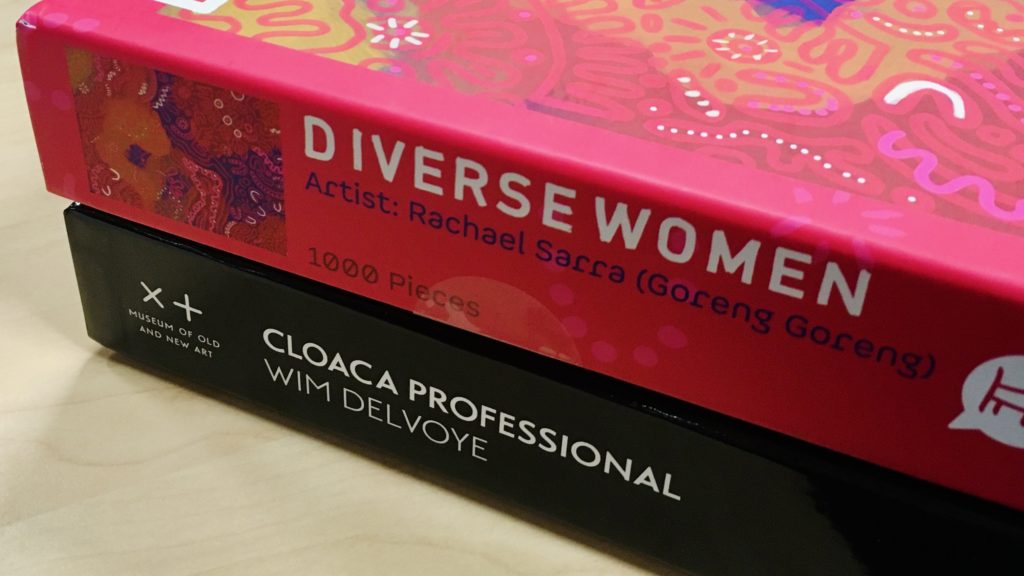 It’s been a while since I catalogued much of anything, so it’s quite nice to be (intermittently) back in the office doing this work. I would have been happy enough dealing with the usual print monographs, but recently two jigsaw puzzles wound up on my desk: one featuring a beautiful contemporary Aboriginal artwork, Diverse Women, and the other featuring the infamous mechanical stomach at the Museum of Old and New Art (Mona), Cloaca Professional. My boss knows I love cataloguing weird stuff and also nobody else wanted to deal with these for some reason, so I volunteered to take one for the team.

The majority of our jigsaw puzzle collection, if it can really be called that, is either cartographic (map-based) or an added extra that came with a book. These two puzzles were neither of those things, so there wasn’t a whole lot of precedent in the collection for how best to process them. I had a peek at the OLAC guidelines but was hoping for something a bit more accessible, so I thought I might as well write it myself. Besides, when the next jigsaw inevitably winds up on my (or your) desk this way perhaps we’ll be a little bit consistent. (I also figured I could shoehorn this into this month’s GLAM Blog Club theme, ‘Discovery’.)

As always, these observations are all mine and not those of my employer. I swear I’m not writing blog posts on company time, honest.

Fortunately someone scrounged up for me a cataloguing template for jigsaw puzzles. Unfortunately this template was really intended for map-based jigsaws, and as such was coded as a cartographic resource (‘m’ in LDR/08). In my mind regular jigsaws are realia, so I coded these records as such (‘r’ in LDR/08), taking out the map-specific fields as I went.

I learned that the 008 for cartographic resources has a specific byte for jigsaws (‘l’ in 008/73). The 008 for realia1, however, is less specific; I settled on coding these as ‘games’ (‘g’ in 008/23), which apparently includes puzzles. This seems an unfortunate gap, but I was unwilling to add a cartographic 006 field just for this one byte, as it has a negligible impact on discovery. Also neither of these things are maps.

Both puzzle boxes featured easily identifiable titles, recorded in a 245 as usual: $a Diverse women and $a Cloaca jigsaw puzzle.

Access points, however, were trickier. A quick Google for ‘Rachel Sarra diverse women’ only returned results that related to the puzzle, which implied that Diverse Women was primarily intended for release as a puzzle, and existed publicly only in this form. I contrasted this with Cloaca Professional, which was already well-known as a public artwork, and of which a photograph was used for the Cloaca jigsaw. Diverse Women artist Rachael Sarra was credited on the puzzle box (garnering a 245 $c); so was Cloaca Professional creator Wim Delvoye, but as that artwork’s creator, not of the puzzle itself.

This suggested to me that the Diverse Women jigsaw is a standalone work, while the Cloaca jigsaw is a derivative work of a different, pre-existing (art)work. I gave Rachael Sarra the 100 field (with the $e artist reationship designator) and was going to only give Wim Delvoye the 700 field (as part of a name/title authorised access point; that is, $a Delvoye, Wim, 1965- $t Cloaca professional), but after thinking about it for way too long I decided to give him the 100 field as well in his own right, to aid discovery of his works. For some reason I kept thinking I could only give him either the 100 or the 700, but not both? I don’t know why I thought that. Perhaps I was taught it at some point.

It’s important to remember that this kind of nuanced distinction is practically meaningless for modern-day search and retrieval, but cataloguers care quite deeply about this stuff because the MARC standard forces us to. I wish it weren’t necessary.

I also gave Mona a 710 added entry, as they were intellectually responsible for the puzzle’s production. I’ve never really understood why publishers don’t get 710 fields, or why the 260/264 $b isn’t routinely indexed. I feel like that would be a useful feature. Probably too useful, I suppose.

A description of the box and its contents was added in a 300 contents field. Interestingly the Diverse Women puzzle has an ISBN (a use for which this persistent identifier was probably not designed), so it went in the 020 field as usual. I did wonder if there was a controlled vocabulary for the 020 $q but the Library of Congress MARC documentation said there wasn’t, so I just made something up. Nice to be able to do that in catalogue records occasionally.

Neither puzzle gave an age range, so I didn’t include a 521 Target Audience Note (though the difficulty of Cloaca in particular suggests these are aimed at adults). However, both puzzles included specific copyright statements, which I felt it important to reproduce in a grandly-named 542 Information Relating to Copyright Status Note.

Diverse Women came with a summary on the back of the box; the Cloaca jigsaw featured one on the Mona online shop, in their trademark irreverent style. Both were duly copied into the 520 summary field.

I admit I was initially at a loss as to how to index these puzzles, especially the Cloaca puzzle. Just how does one represent ‘jigsaw puzzle of a photograph of a mechanical digestive system’ in LCSH? For better or worse I am paid to figure out these things, eventually settling on the delightful (and new to our catalogue) ‘Scatology in art’ for Cloaca, and ‘Jigsaw puzzle art’ for Diverse Women.

The Diverse Women puzzle was additionally indexed using an AIATSIS subject heading, in line with MPOW’s cataloguing policy for First Nations materials (it’s a great policy and your library should do this too). I tossed up whether to include a heading for the Goreng Goreng people, as the box notes that Rachel is a Goreng Goreng woman but the resource isn’t strictly about the Goreng Goreng. As a white woman I’m not the best person to be making that decision, but I also didn’t want to bother my Indigenous colleagues about every single little thing related to cataloguing Indigenous resources. I ultimately decided not to include the heading, choosing instead to fully transcribe the artist credits on the box in the 245 $c. if a future cataloguer disagrees, they can always add the heading in later.

The Library of Congress Genre/Form Terms vocabulary features the term ‘Jigsaw puzzles’, so that was included in a 655 field in each record. MPOW doesn’t routinely use the 380 Form of Work field and it’s not indexed in our system, but you could use this field instead if you prefer.

These may or may not precisely match what’s on the ANBD, but should give you a pretty good idea of what goes where. (I reserve the right to edit these later and fix my inevitable errors, haha.)2